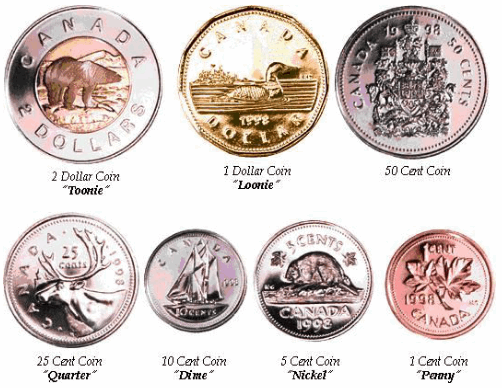 The Canadian dollar, made up of 100 Canadian cents, is the official currency of Canada. According to the International Monetary Fund, the Canadian dollar, one of the eight world reserve currencies, is known for its stability and reliability. It consists of six coins and five bills, which all feature an important national symbol or icon.
Starting from the lowest denomination, the penny is worth 1/100 of a dollar, or one cent. It features two maple leaves, the emblem of Canada. The nickel, worth five cents, has a beaver, a keystone species in Canada’s ecosystem. The dime, worth ten cents, features the famous Nova Scotia schooner, the Bluenose. The quarter, worth 25 cents, depicts the beloved antlered caribou, the hardy members of the deer family found all over Canada. The one dollar coin, or loonie, is so nicknamed because it features the loon, Canada’s national bird. The two dollar coin, or toonie/twoonie, is distinctive for being bicolored, and depicts a polar bear in its gold center. All coins have the portrait of Queen Elizabeth II on the reverse side, which is updated every so often.
Canadian paper money, known as bills, banknotes, or simply notes, are made of a thin flexible plastic called polymer. They are very colourful, with a blue five dollar, a purple ten dollar, a green 20 dollar, a red 50 dollar, and a brown 100 dollar bill. The front of these bills bear the portraits of influential prime ministers and the queen. The backs feature several objects of note in Canadian history, such as the railway and a monument honoring fallen soldiers, as well as a salute to the discovery of insulin by two Canadian scientists.
All Canadian coins are struck by the Royal Canadian Mint. In addition to the standard-use designs listed above, the Mint also produces a vast array of “special edition” coins, many of which bear commemorative designs celebrating Canada’s history and culture. A few notable examples include the centennial series, in which the entire set of coins was issued depicting animals indigenous to Canada, in honour of its centennial in 1967. Another is in 1973, when the image on the quarter was replaced with that of a Royal Canadian Mounted Police officer on a horse, to commemorate the founding of the RCMP. In collaboration with the Vancouver Olympic Committee, the Mint launched the three-year Vancouver 2010 coin program, which included the production of 17 circulation coins. This program was the largest ever circulation coin series celebrating the Olympic and Paralympic Games.