第40回の今回は
(1) Referring to scientific instruments and scientific techniques:
Subtle distinctions in the usage of by and using
”（計器や技術）で～”というときの、byとusingの使い分けとは？ 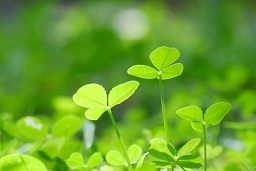 I hope you’ve had the opportunity to enjoy the cherry blossoms, and perhaps to meditate on the transience of life while watching the petals fluttering to the ground. In this issue, we review the usage of by and using when referring to scientific instruments and scientific techniques, then examine the differences between time and term. We conclude by looking briefly at some common expressions related to environmental friendliness.

(1) Referring to scientific instruments and scientific techniques: Subtle distinctions in the usage of by and using

Back in the Autumn 2013 issue of Quarterly Review (issue No. 14), we examined the differences in usage of by, through, and with. This time, let’s explore the different ways in which we use by and using when referring to scientific instruments and scientific techniques.

When we are referring to a scientific instrument, we can use either by or using (although using is more common). However, there is a small difference related to article usage that has to be kept in mind: 
♢ In the case of using + [instrument name], we need to insert the indefinite article a or an (for example, using an X-ray spectrometer; using a microphotometer). 
♢ In the case of by + [instrument name], we do not use an article (for example, by X-ray spectrometer; by microphotometer).

The question then arises: Are there any situations in which it would be better to use by rather than using, or vice versa? Although either by or using can generally be used, as mentioned above, there are cases when one or the other is more appropriate. Please see following sample sentences:

(i) The specimen was analyzed by spectroscopy using an ABC device.
→ Here, to avoid the use of by or using twice in the same sentence, we use by before the technique and using [plus the indefinite article an] before the instrument. This is the most common pattern, and is usually the best choice.

We also use term in expressions beginning with the word over; e.g., “over the medium term” (note that there is no hyphen between medium and term here, again because these words do not form a compound adjective). It is possible to say “The procedure can be completed in a short time,” but it would be unnatural to say “in a short term.” Rather, as shown in the first sentence of this paragraph, the expression most commonly used with term is over + the (e.g., “over the short term”), even when this is the first time that the short term is being mentioned. It would look strange to say “over a short term.”

Until next time, enjoy the warmer weather and keep up the good work!